We Could Have Missed This 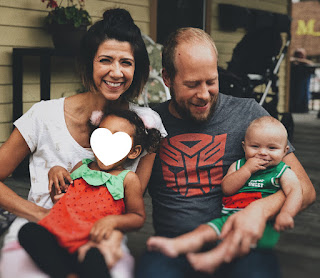 A little over two years ago we resigned as associate pastors as we pursued the next “job” that God had for us: missionaries to Mexico.  K-man reunited with his bio family and a week later we left for a month of training in Missouri.

Our goal was to have our budget to leave for Mexico raised in a year, so we closed the door to fostercare.  It didn’t fit in our timeline.  We had always been open to private adoption, but the expenses of that were too great with the daunting assignment of raising money for Mexico as well.  So, we surrendered our hopes of starting a family anytime soon.

However, we decided to call our case worker and let them know that we wanted to stay in the system for a “miracle adoption”... an adoption where both parents had surrendered rights and we would be able to adopt before we left.  We told them that we didn’t expect for this to happen but just wanted to leave our hat in the ring, so to speak.  Being that we had moved to a new apartment they needed to relicense our home, and the case worker told us that someone would be out in about 2 weeks to do that.

It was the middle of the afternoon, and we were babysitting K-man for a few days.  I was at my sister’s house with him when I get the call from Noah…

“Can you talk?”
I knew that voice.

I let him explain to me the situation… baby girl, not even 2 days old, healthy, being discharged today, possible fast track to adoption depending on who the father was.

I asked Noah what he thought and he said,
“It’s like we’re living in a world of yellow circles and a blue square just walked in.”

He had already called his dad asking for advice because he knew I would be in the same boat he was in.  You know what his dad’s advice was?

I can’t explain to you how those 5 words impacted both of us.  We were still broken over K-man leaving and were heading out to leave to Mexico in a year.  There were SO many variables to this equation, yet this sound and godly man didn’t seem to see a problem.

Noah and I talked, hung up, prayed, and talked some more… we only had an hour to decide; they were discharging her that afternoon.

Both of our minds were blank, except for one thing: peace.  There was no sense of fear, no overwhelming checks in our guts that advised us to say no.  Only peace.  Not peace with a promise of adoption.  But the kind of promised peace that comes when God’s driving the ship.

We called the caseworkers and told them yes, and then they said that because our new apartment wasn’t licensed yet that they weren’t actually sure she would be able to come to us.

Save yourself the time and skip Six Flags. Join fostercare.

A half hour later they decided to skip the formalities, I guess, because they called and said they were discharging her and she would be to us in the next few hours.

I was actually nervous to tell people.  I was always very open about the dark place that I found myself in when K-man left, and I knew that would be a concern for some of my family.  I used to say, “we’re either gluttons for punishment or have a lot of faith”.

I’ve been inundated lately with this idea.  This idea of not believing God for things.  Here’s the deal… I will always have hope.  I can’t help it.  I’m an optimistic person.  And I’m starting to believe that it’s a gift from Jesus.

In fostercare you are forced to live in a world of harsh realities; a world of brokenness and sin.  But if I’m going to live in that world then I’m gonna bring Jesus and all His mighty power with me.

When we said yes to Baby A it “seemed” foolish to many, but we knew in our hearts that it was right.  We knew that God had orchestrated her arrival.  We knew that God had not only her in the palm of His hand, but us too.  We felt the brush of his pen every time we encountered trials and obstacles and saw how He overcame them.

We have seen God do so many miracles over the last 2 years.  Not always the miracles that we asked for, but miracles of His own authority that I could’ve never dreamed of.

One specific miracle that He didn’t answer was when we were basically begging Him to have Baby A be adopted by December 2017 (so we could get to language school by January).  As we came into November and realized this was not happening, we were pretty discouraged.  We had mustered up all our faith.  We gave God our all.  We spoke this miracle into existence.  Yet our hopes and dreams lay stagnant.

I found a pretty intense journal entry the other day from November 2017… I was lamenting to the Lord my frustrations and sorrow at how he was seeming to ignore not just our prayers to adopt Baby A, but adopt in general.  We knew there were millions of children that needed permanent homes, yet my arms remained empty.

It was one month later that we were told about sweet Jesse’s mom and the situation she found herself in.  One month later God picked up His pen again and continued writing a story I never dared to dream.

If God had answered our prayers about Baby A’s adoption in January, then we wouldn’t have our son.

We could’ve missed this.

Popular posts from this blog

June 10, 2016
When I was 11 I went to Disney World, and I remember that it would be a super sunny day, gorgeous breeze, and then out of no where a rainstorm would come.  So, we'd pull out a poncho and stay on line, waiting for our ride. In some ways I feel like that 11 year old girl at Disney World, except that instead of a rainstorm its tears, instead of a poncho its tissues, and instead of waiting on line I'm just living life. Our little K-man, Tub of Chub, K-money, bambino left us a week ago.  I can't believe it's only been a week... it feels like a month.  The days drag on like there's no tomorrow, and the nights are filled with restless sleep.  Add to that the fact that this entire week we've been moving out of our house as we wrap up our time being on staff at Life Chapel.  This Sunday we embark on our new journey as we follow God's leading to share His love with the people of Mexico (which is super bittersweet AND exciting!) I think the hardest part about be
2 comments
Read more

The Not So Safe King

July 18, 2018
Susan: “Is he-quite safe? I shall feel rather nervous about meeting a lion" "Safe?" said Mr Beaver ..."Who said anything about safe? 'Course he isn't safe.  But he's good. He's the King, I tell you.” A little over one year ago I finally went skydiving.   It was pretty much the only thing on my bucket list, and it’s been on there for as long as I could remember.   I finally “had the chance" (as in I made it happen) while Noah and I celebrated our 5 th anniversary.   I’ve always loved that feeling of adrenaline and couldn’t imagine a better way of experiencing that than hopping out of a plane at a crusing altitude of 10,000 feet.   As we boarded the plane that could BARELY fit Noah, me, our 2 tandem jumpers and the pilot, the fear grew with the height of the rising aircraft.   My fear became mangled with giddy laughs and excitement as the plane crept higher and higher… soon my fear dissolved like the land below as I rea
Post a Comment
Read more