The Not So Safe King 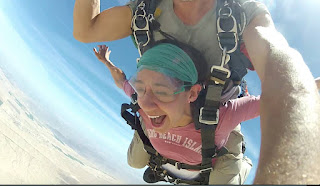 Susan: “Is he-quite safe? I shall feel rather nervous about meeting a lion"
"Safe?" said Mr Beaver ..."Who said anything about safe? 'Course he isn't safe. But he's good. He's the King, I tell you.”

A little over one year ago I finally went skydiving.  It was pretty much the only thing on my bucket list, and it’s been on there for as long as I could remember.  I finally “had the chance" (as in I made it happen) while Noah and I celebrated our 5th anniversary.  I’ve always loved that feeling of adrenaline and couldn’t imagine a better way of experiencing that than hopping out of a plane at a crusing altitude of 10,000 feet.  As we boarded the plane that could BARELY fit Noah, me, our 2 tandem jumpers and the pilot, the fear grew with the height of the rising aircraft.  My fear became mangled with giddy laughs and excitement as the plane crept higher and higher… soon my fear dissolved like the land below as I realized I was actually about to do this.  I wanted to be the first jumper, and it was time.  The door swung open, and we scooted our way to the edge of the plane.  I looked out into the open skies and suddenly found myself stammering “I don’t’ wanna do this! I don’t wanna jump!”  But before my mouth could find any more convincing arguments, we were free falling.  The wind was nuts that day, and I asked the guy to do some extra rolls in the air... to which he happily obliged.  Eventually I felt that tap on my shoulder which meant that I could spread my arms out and soar like the birds.

And soar I did.

When we landed I asked the guy about that millisecond before we jumped, questioning if he had heard me say I didn’t want to.
He replied, “Yep.  And I knew it was in that moment that we just had to do it”.

I knew then that this post was in the making.

This journey that we have been on with Baby A (who, news flash, is more like TODDLER A… how?!) has wrecked my soul.  I have wrestled with God on so many things.  Things like trust, fear, faith, hope, and waiting.  Things like joy, love, goodness, and free-falling into His arms.  This decision that I made when I was 5 years old, to follow Jesus, was made by a very naïve child.  An appropriately naïve 5 year old, but naïve none the less.

It’s become my belief that true, untouchable joy can only be felt when you’ve been marked by true pain.  I’ve brought, and am still bringing, before Jesus so many of my wounds and hurts.  Hurts that I have blamed on Him.  Scars that I know He could have prevented.  Questions about His goodness in this broken world.  And everyday I will continue to keep laying bumps and bruises at His feet as I struggle to understand and trust His ways.

But one thing I have come to believe without a shadow of a doubt is that He is GOOD.

This quote from The Lion, the Witch and the Wardrobe has been playing over and over in my head the last months.  I can’t escape it’s truth.  God is anything but safe.  We don’t serve Him to sit on the plane looking at the ground below.  There is a time to sit in the plane… and then there’s the time to jump, and only He knows when that is.  I’m just glad I’m tethered to His side and not flying solo.

Jumping out of that plane was the most thrilling adventure I've chosen for myself.  But the King, the not-so-safe-but-always-good King, has had some much grandeur rides in store for our family, and I'm scared stiff these days.  I'm not free-falling and soaring like a bird.  I'm bear-hugging our dear Lord, eyes tightly shut, and blindly trying to go through my days as I can barely think about the activity surrounding us.  Life has sent me swirling, and I'm white-knuckling my way through life instead of truly trusting Him.  It's time to let go.

Popular posts from this blog

We Could Have Missed This

September 13, 2018
A little over two years ago we resigned as associate pastors as we pursued the next “job” that God had for us: missionaries to Mexico.   K-man reunited with his bio family and a week later we left for a month of training in Missouri. Our goal was to have our budget to leave for Mexico raised in a year, so we closed the door to fostercare.   It didn’t fit in our timeline.   We had always been open to private adoption, but the expenses of that were too great with the daunting assignment of raising money for Mexico as well.   So, we surrendered our hopes of starting a family anytime soon. However, we decided to call our case worker and let them know that we wanted to stay in the system for a “miracle adoption”... an adoption where both parents had surrendered rights and we would be able to adopt before we left.   We told them that we didn’t expect for this to happen but just wanted to leave our hat in the ring, so to speak.   Being that we had moved to a new apartment
2 comments
Read more

June 10, 2016
When I was 11 I went to Disney World, and I remember that it would be a super sunny day, gorgeous breeze, and then out of no where a rainstorm would come.  So, we'd pull out a poncho and stay on line, waiting for our ride. In some ways I feel like that 11 year old girl at Disney World, except that instead of a rainstorm its tears, instead of a poncho its tissues, and instead of waiting on line I'm just living life. Our little K-man, Tub of Chub, K-money, bambino left us a week ago.  I can't believe it's only been a week... it feels like a month.  The days drag on like there's no tomorrow, and the nights are filled with restless sleep.  Add to that the fact that this entire week we've been moving out of our house as we wrap up our time being on staff at Life Chapel.  This Sunday we embark on our new journey as we follow God's leading to share His love with the people of Mexico (which is super bittersweet AND exciting!) I think the hardest part about be
2 comments
Read more